With the Green Homes Grant Scheme now in full force we were keen to find out the thoughts and experiences of those in the industry. The scheme was launched to help the industry bounce back after the coronavirus crisis and help homeowners create more sustainable homes whilst lowering their energy bills. The scheme is well underway after launching last month, so, let’s get into the results and feedback on the scheme overall from installers.

Just over half of respondents (56.3%) thought the scheme was good for the industry.

Some of the reasons behind those who thought the scheme was good included:

“Helping to grow the renewable industry and lower carbon emissions.”

“It is raising the awareness of a wider group of people to the advantages of Green products, therefore expanding the opportunities to create more jobs especially in the current climate of uncertainty of many occupations.”

And for those who didn’t the scheme was a good idea, some of the explanations were:

“The scheme is kidnapped by large companies with hard sell techniques to create no competition sales and rip the customer off as they are getting a grant towards the cost so can massively inflate the prices. There is no chance of the consumer getting fair, sensible advice and prices from smaller companies to ensure the quality of the installations is maintained.”

Timing of the scheme

When asked whether installers would like the scheme to continue past March 2021, the majority (68.8%) voted yes.

The majority believed that the installer guidance provided around the Green Homes Grant Scheme has not been sufficient at 87.5%.

When asked to elaborate, some of the reasons behind this were:

“Because it took too long to publish company requirements, I have TrustMark but no PAS2030, this was not clear. Now I have to wait 2 months because of the backlog and as usual, this scheme will be exploited as it already is with companies’ piggy backing off others that have all the measures. It’s ridiculous and not thought through even after all the other schemes were a disaster for installers.”

“Everything is too short notice and too tight on timescale. The timescale also wouldn’t be so tight if the information had been available prior to grants opening. The limited information was too vague. Reflects badly on installers and then becomes a rush and more likely to cause problems with installation and supply.”

“It was not issued early enough so that the terms and conditions could be read, resulting in lots of enquiries and quotes to no avail.”

“Encouraging lots of time wasters, people wanting something for free, encouraging bad installs and mis-selling. Any decent installers are busy anyway we don’t need people phoning just to get their third quote, dealing with the enquires is consuming all our time for little if no reward. The fact that we are having to bank roll these installs until we are refunded realistically, we could only install 2 systems. Extend the RHI and ditch this ridiculous scheme.”

The process of becoming accredited

Feedback also revealed a 50:50 split on how easy (or not) installers found the accreditation process, and out of those, over 18% thought the process was expensive.

The survey revealed that installers used a range of TrustMark scheme operators such as HIES, NAPIT, NICEIC and RECC, with 62.5% happy with the support provided.

The survey revealed that 50% of installers were currently struggling with capacity for work under the Green Home Grants Scheme. 25% were ‘very busy’ leaving just 25% ‘quiet’ or with ‘no enquiries at all’.

“We can’t manage enquiries and that seems to be an issue with customers saying that they can’t find anyone to get a quote. Need more suppliers and more time to do the work.”

The majority of customers have had difficulty with the Green Homes Grant Scheme – 56.3% experienced difficulty around applying for the scheme and 43.8% found it difficult to get information about the scheme. 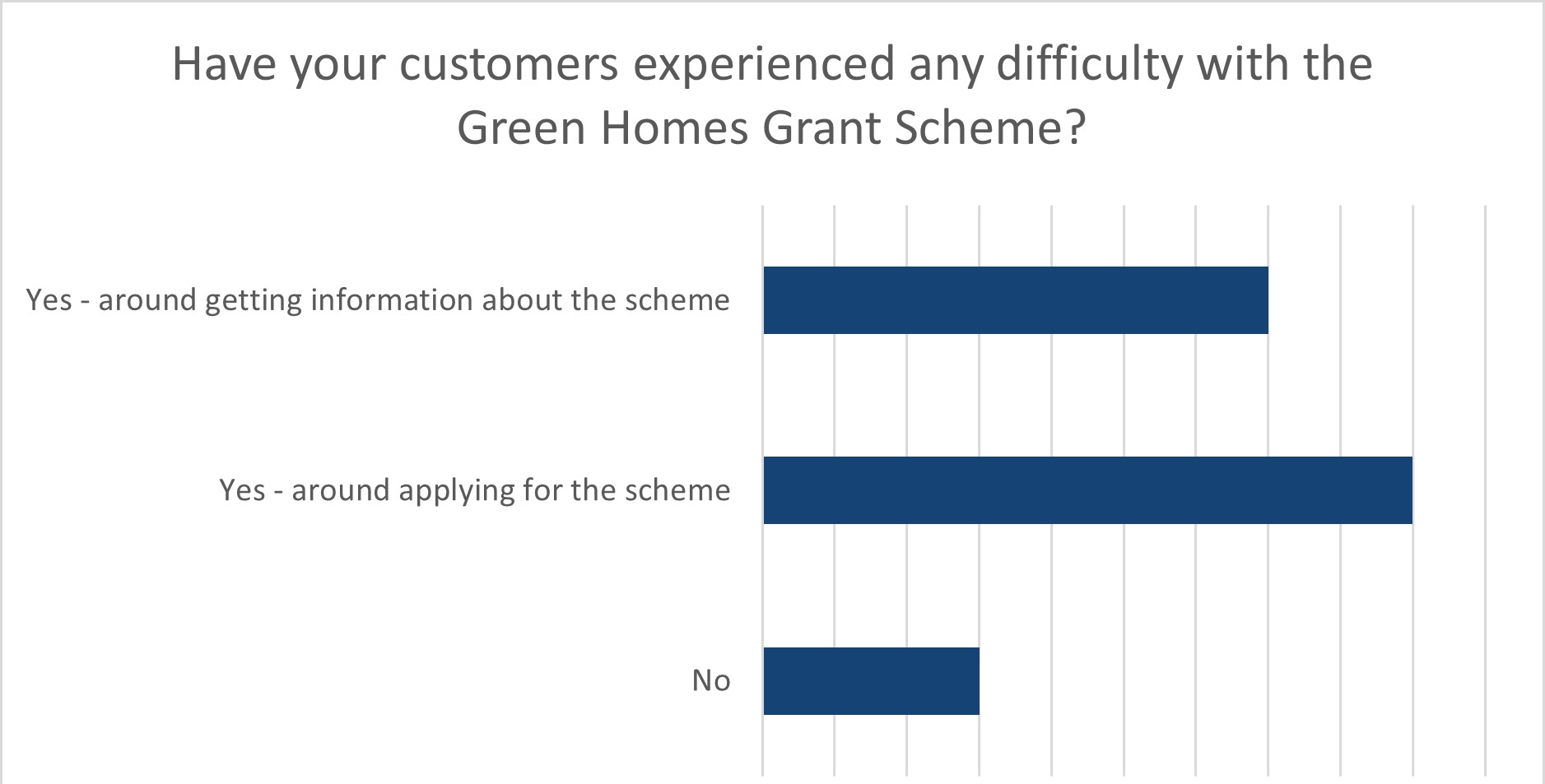 One of the driving reasons behind launching the scheme alongside environmental targets was to also create more jobs within the industry. However, only 25% of those surveyed have to date employed more staff as a result of the scheme.

“As to the question are we employing more staff this may be an option as we are certainly getting lots of enquires, however, it is not so easy to get competent qualified staff.”

The measures or combination of measures installers thought were in most demand were: 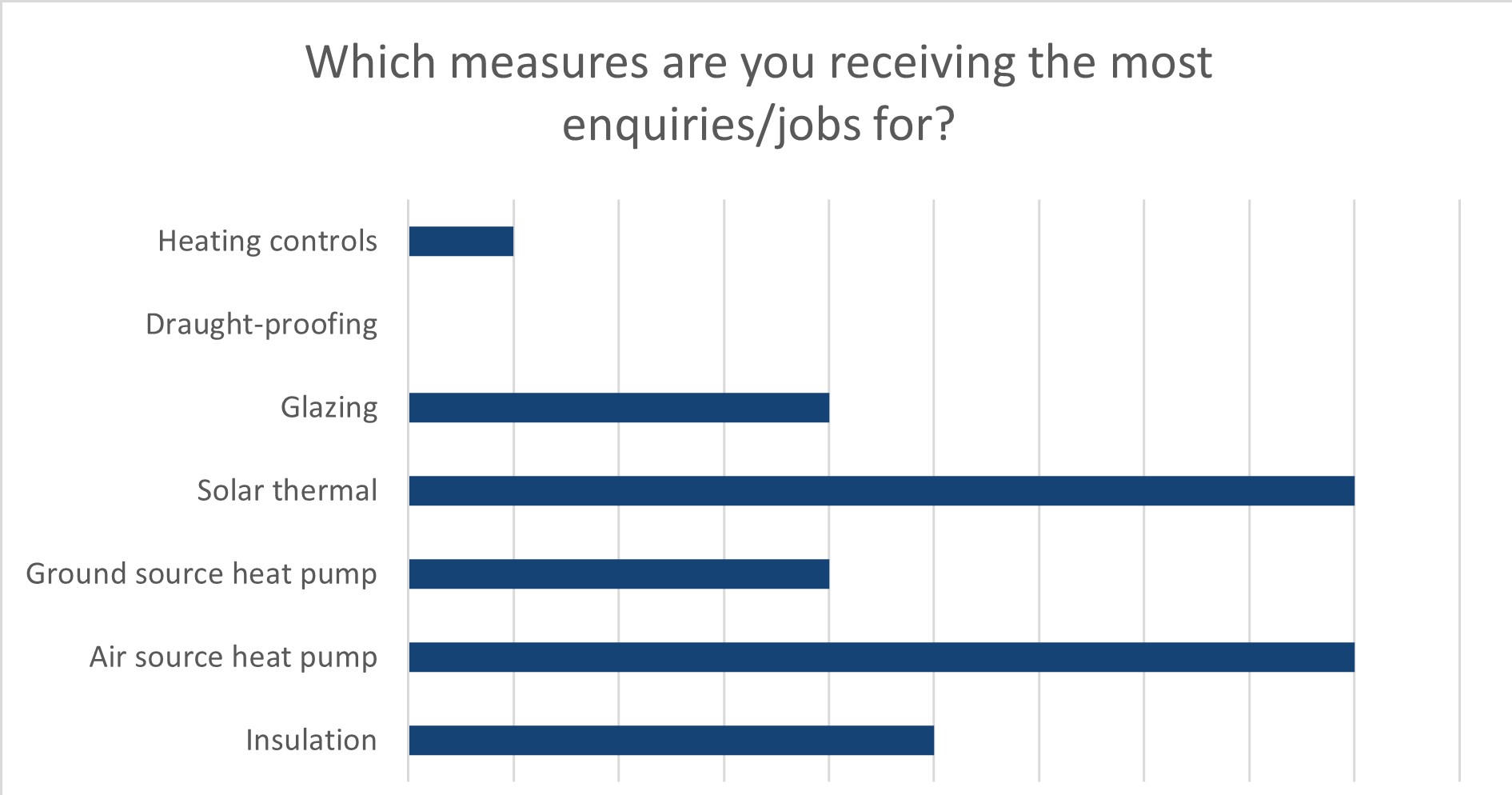 “Companies like mine that have been operating competently installing thousands of properties, having achieved Trustmark, installing a BBA approved product, FCA regulated, Checkatrade and TrustPilot reviews open for investigation should not have to spend thousands more to install under this scheme. Why are only 1000 companies onboard across all products, because companies can’t be bothered with all the red tape.”

“Consumer needs more to be able to tap into local approved tradesman and companies who have a good Trustmark review and are members of a recognised trade association and allow these installers to be considered so the work done is of a high quality with a professional back up service.”

“Good plan with bad planning. The scheme rules should have been released before the scheme opened. For consumers and installers.”

“As a secondary measure installer, the time scale was not long enough the ensure that we would get paid. Not enough guarantee for the installer when primary measures had to be completed and redeemed. We would not want to start an install if the primary measure meant we could not complete in time but the customer would not pay us if that was to happen.”

“The scheme prevents compliance with MCS rules but seemingly nobody has picked this up yet.”

“Limited in scope – would be better if included solar PV to promote the government’s own objectives.”

“I think the RHI is enough and allowing cowboys to install heat pumps on low income properties is a mistake.”

Have you ever wondered what type of #soffit is best for your home or when it should be replaced? If you answered ye… https://t.co/JO6BJPBOyj Via - Hootsuite Inc. - 1 Day, 12 Hours, 20 Minutes ago